The morning of Wednesday, May 16, the SPCA received a desperate plea for help with a hoarding case in Southern Virginia. 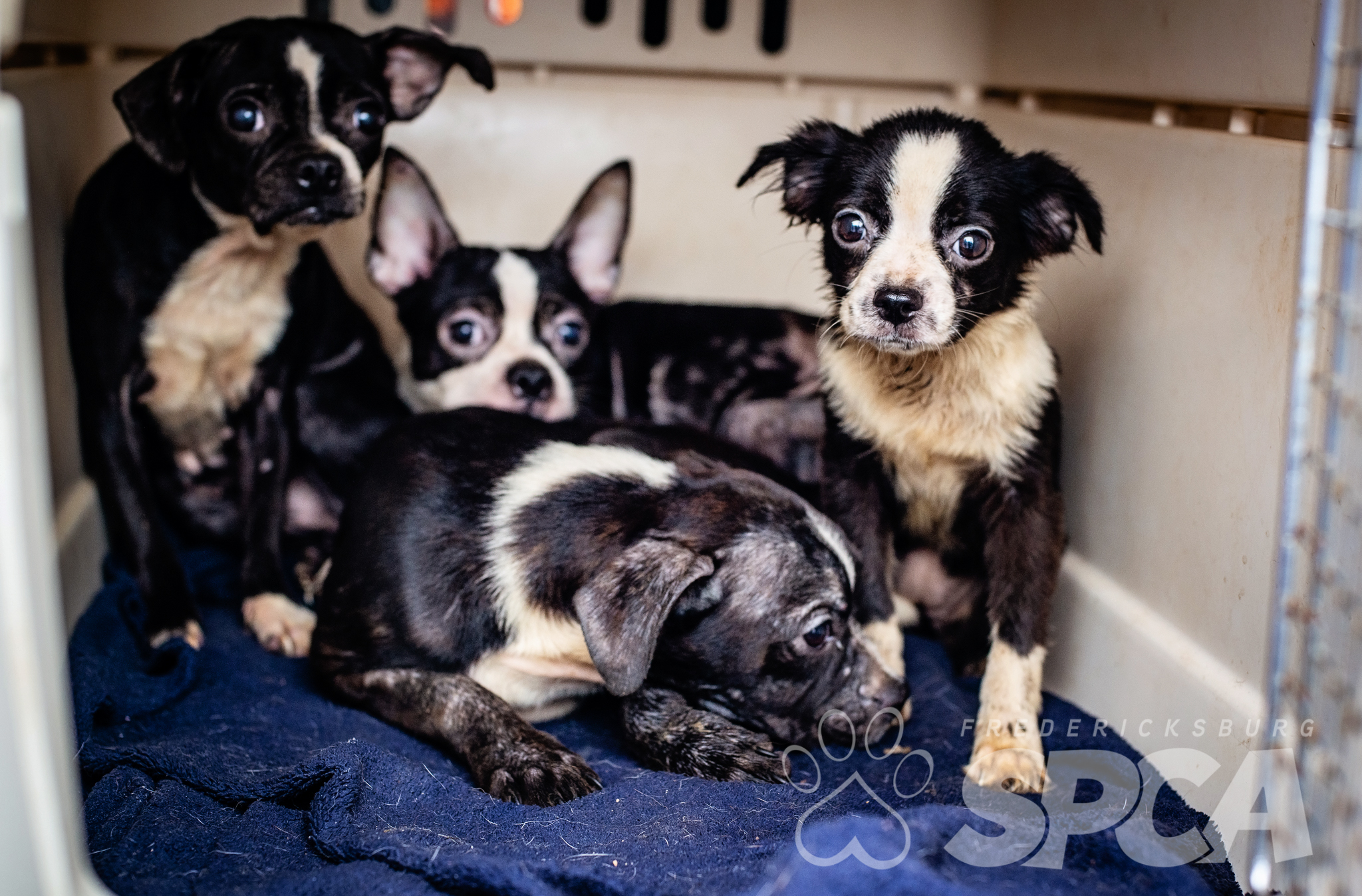 Over 50 dogs had been identified as living in a home with little to no human interaction for months. Two SPCA team members loaded up the rescue van with safety crates and headed on a three hour drive to save as many dogs as possible.

Upon arriving at the address, you could tell that the house had been abandoned for quite some time. There were empty bags of dog food littering the yard, as well as a lawn long overdue for a cut. The smell was noticeable almost before the home was in sight.

The team hardened themselves for a moment, standing outside the front door, unsure of what scenes might await them on the other side.

When the team first entered the home, the first thing to overwhelm them was the smell. The floors were caked with 5-8 inches of compacted waste; the debris and fecal matter so dense that most doors could not be opened.

Inside the home, there were 50+ small breed dogs living in varying degrees of squalor. One room had several dogs living inside of a mattress, while another had dogs living amongst empty bottles of Tide and Bleach. There was a small, black dog in the basement, living in sewage and feces. All of the animals were in some state of illness, both mental and physical.

In the back yard there were two sheds. One shed was bolted shut and housed several female dogs, one severely pregnant dog was found confined to a locked crate stacked on other crates with no access to light, food, water, and space to move. These animals hadn’t been tended to in months, and their bones were literally protruding from their tiny frames. It is a wonder that they were able to survive as long as they had.

The other shed housed a macabre collection of skeletons and refuse.

The SPCA Team was dedicated to get every animal possible off of this premises, and that is what they did. The van arrived back at the shelter shortly after 4pm,clouds hanging heavy in the sky. Within moments of arriving, the flood gates opened and the staff, volunteers, and neglected animals were caught in a downpour.

After everyone was safe inside of the facility, though a bit damp, it was time to begin the arduous task of administering vaccines and fluids, triaging illness, and dispensing medications for those fairing the worst. We had all hands on deck: staff, fosters and volunteers all pulled together to complete this feat.

Within hours, every dog was fully vetted and had a treatment plan. Foster parents began showing up to take their dogs home for the first real night of peaceful rest in a long time. By the evening, every animal was accounted for and safe.

Within days, the extremely pregnant mama dog gave birth to one healthy puppy when tragedy struck. She was unable to successfully give birth to the rest of her babies. Our shelter veterinarian, Dr. Coleman, performed an emergency C-section. Mama Snag only lost one baby, and the rest are thriving.

There were dogs who were locked inside rooms who have never seen the sun, and as a result have poor vision and cataracts. They don’t know what sun or even grass is, and witnessing them rediscovering what it is to live a good life in their foster homes has been nothing short of amazing. Water bowls were a strange item that they were introduced to in foster care – they  didn’t know anything besides the sewage puddles in the house to drink. Most had to be enticed with chicken broth or liquids put in their food in order to stay hydrated.

We were desperately in need of monetary donations;  from start to finish that this whole ordeal was looking to cost us nearly $10,000 for medical cost and supplies. The Bissell Pet Foundation was one of the first signs of relief for the Fredericksburg SPCA. They graciously stepped up and donated $5000 to our life saving efforts! We cannot express what this gesture meant to the team and the dogs! So much of what we accomplished was funded by this gift.

The good news is these dogs are just the sweetest behaviorally! Even though they were scared, they still sought love and affection, gaining confidence every day. These precious animals have been nursed, snuggled, coddled, cuddled, and adored since they arrived. They are all learning quickly how to live in a home environment and they will have amazing lives from here on out.  Watching them blossom and figure out basics and what comfort is has been amazing. Photos and videos were streaming in from fosters to show the progress of the dogs. Most of the #BT58 have been spayed/neutered, vaccinated, microchipped and already ADOPTED! We are thrilled to be on this journey with these dogs and cannot thank the Bissell Pet Foundation enough for being there for this amazing rescue mission.  Click here to see more of what the Bissell Pet Foundation does!