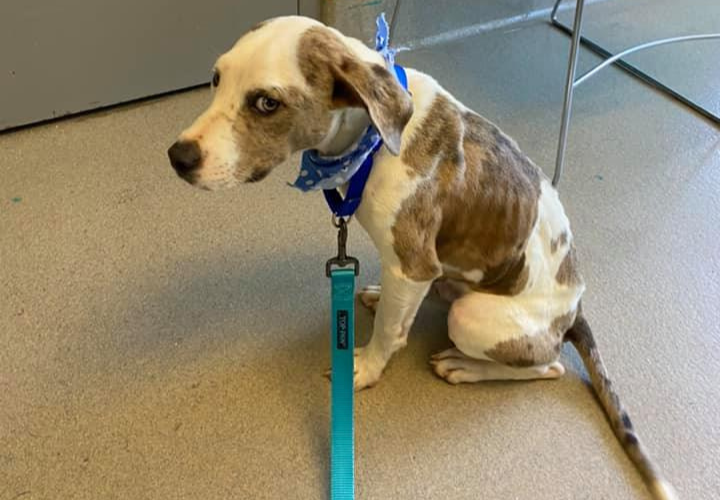 A Beautiful Day To Save Lives

When brother pups Willie & George arrived at the Fred SPCA, it was apparent both pups were emaciated and in need of medical care. Upon intake, George tested positive and was diagnosed with canine parvovirus. Parvo is a preventable illness that is fatal if not caught and treated in its early stages. His brother, Willie, luckily did not test positive for parvo and was placed in foster care and adopted shortly after he received his (less extensive) medical care.

George was lucky to have an experienced foster in Holly, who is not only a seasoned member of our Fred Foster Fam but also, the Fredericksburg SPCA Locke Community Medical Center’s lead veterinary assistant! Holly monitored and cared for George after he was placed on an IV pump and gave him his fluids, and injections. Holly was kind enough to share her and George’s journey with us and we think it so perfectly highlights the impact of animal rescue on both people and their pets. “George came to the shelter severely underweight, covered in scars, and full of intestinal parasites. It was apparent he had a rough start to life. He then tested positive for canine Parvovirus. Parvo is a virus that causes severe illness in young and unvaccinated dogs. It can be fatal if not caught and treated early. Being the lead veterinarian assistant at the SPCA clinic, I took over care for him. He was immediately moved to isolation and started treatment. We set him up on IV fluids and medications immediately, but his chance of survival was still not guaranteed. I visited him every morning and every evening, even on my days off at the clinic, to give him more injections and infuse more medication into his IV that had to be done over a 30-minute span.

Over the next couple of days, he wasn’t making any improvements, and I was worried for him. We were going to send him out for 24-hour care since no one was able to keep an eye on him overnight at the shelter. Instead of sending him out, I decided to take him into my home so I could watch him overnight. I set him up an isolation area in my bathroom.

He was the sweetest boy and was obvious that he just wanted some love while he wasn’t feeling well. That first night, I slept on the bathroom floor with him, very carefully since he still had his IV in, and he snuggled up next to me all night long. We bonded immediately and his sweet soul just made my heart melt. The next morning, I offered some plain chicken to him out of my hand and he ate 2 bites!! This was a huge turning point! I was so happy he was finally hungry again after not eating for days. He continued to improve more and more each day. He was getting that puppy energy and I could see the sparkle in his eyes finally come back! I continued to lug him back and forth between my home and shelter every morning and evening. After some more time, we retested for parvo and the test came back negative! That night he didn’t have to get cooped up in my bathroom, he got to check out the rest of the house and meet the other dogs! He took a liking to my other SPCA alumni dog, Reia. Reia can be picky about who she chooses to let play and snuggle with her, but she opened up to George and became his little mentor.” 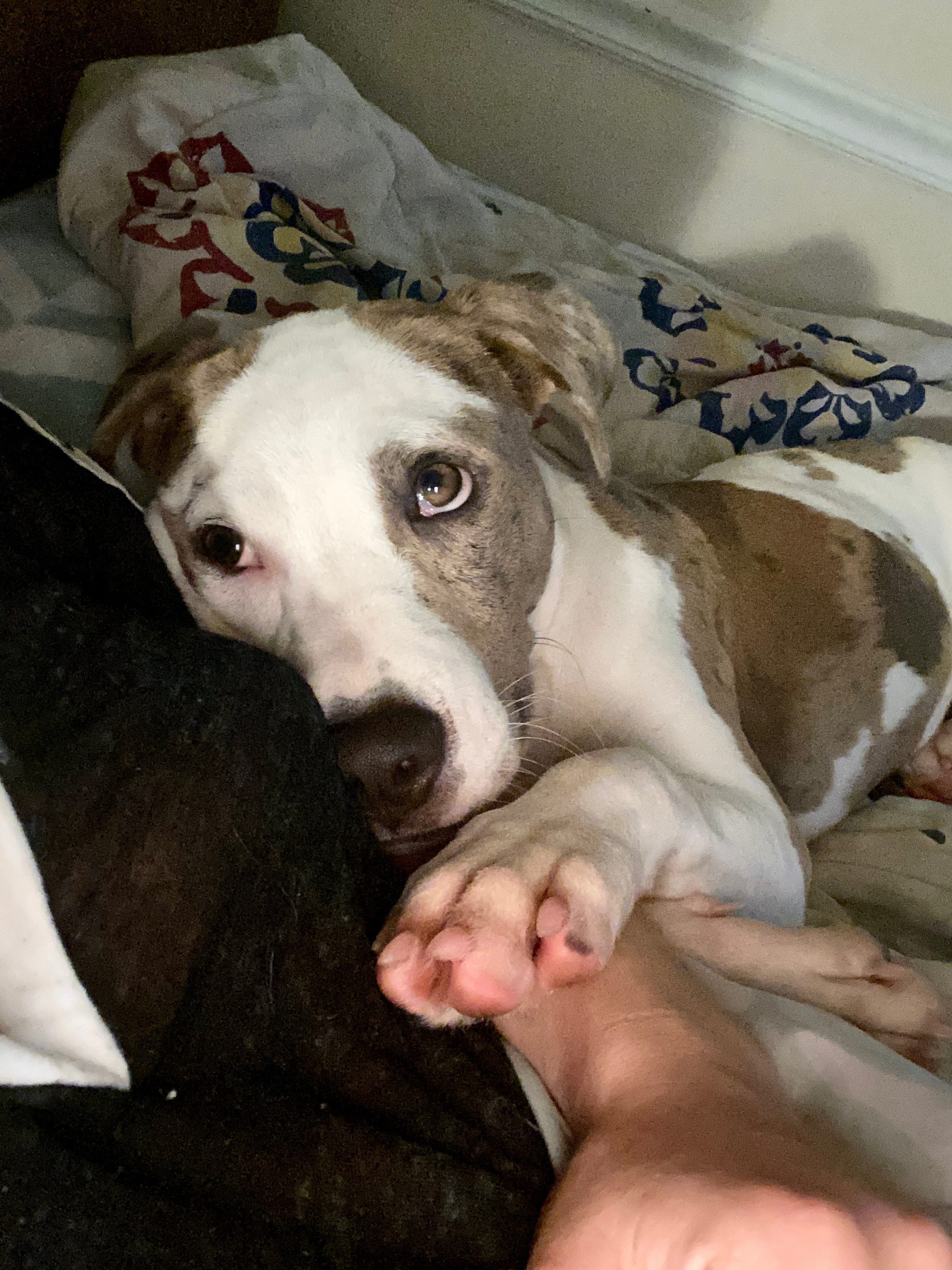 “Even after the parvo was cleared George still had a long recovery and weight gaining to do, so I kept fostering him. Our bond got even stronger as his personality started to come out more. A few weeks later, my girl Reia passed from cancer. He helped me through my grieving by snuggling up next to me licking my face every night as I mourned for my girl. I knew I couldn’t let him go, so I decided to make him apart of the family and finalize his adoption! I loved that George got to have a bond with my girl before losing her. I believe Reia helped pick him for me!

George has since grown into such a mischievous little boy! He is my shadow and follows me everywhere. He is still scared of a lot of things but has slowly started to trust new people and willing to check out new places more and more each day. He enjoys snuggling in bed every night and coming to work with me too. I think he is enjoying his new life of luxury! George helped me through one of the hardest times in my life and I can’t thank him enough for that. Not only did I rescue him, but he also rescued me too! “ 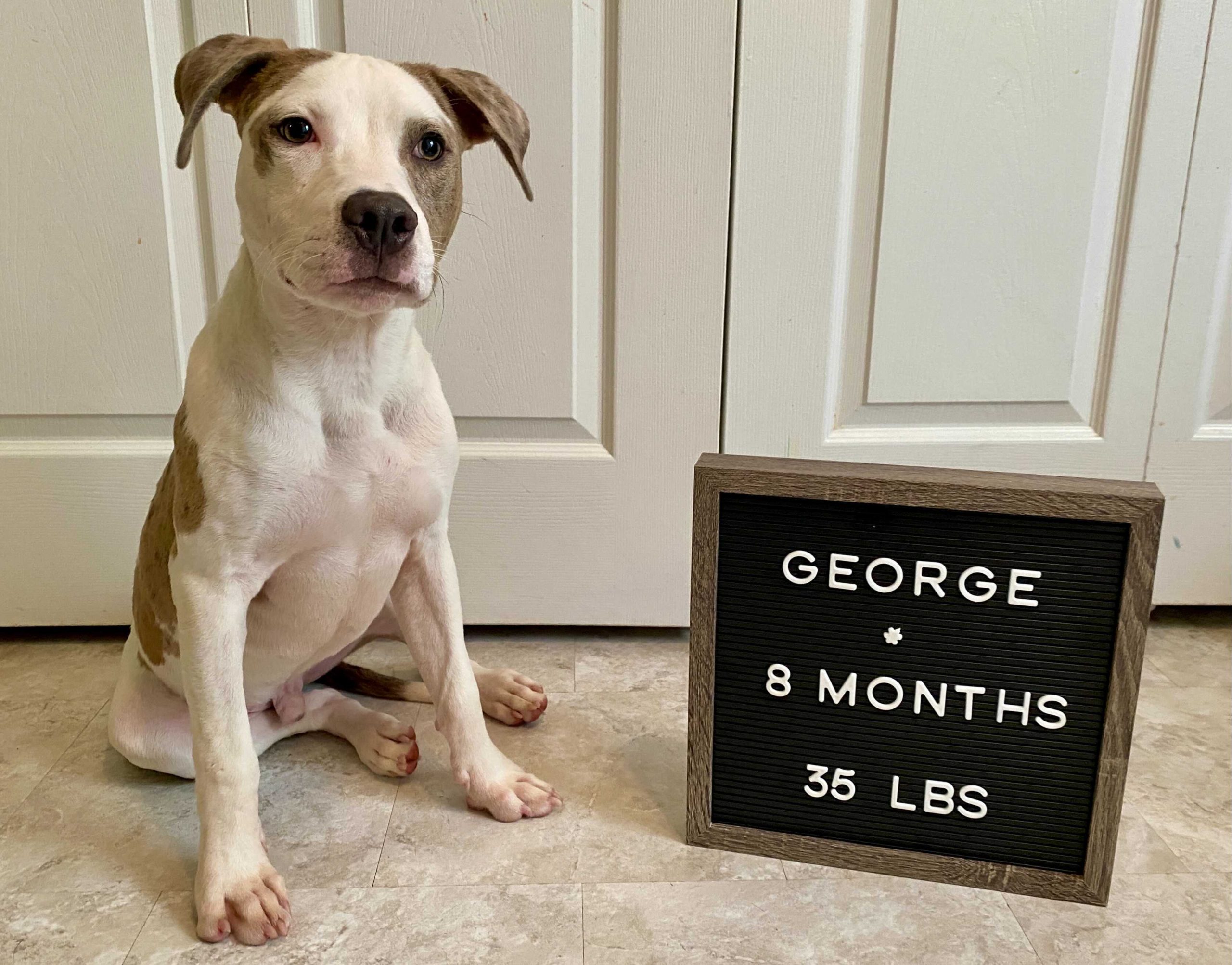 While George was lucky to have been in the right place at the right time, other pups may not be. Canine parvovirus is completely preventable through vaccination. The Fred SPCA Locke Community Medical Center offers monthly, exam fee-waived, drop-in vaccine clinics for our pet-owning community. Drop by to get up-to-date on vaccinations, pick up preventatives, get your pet microchipped or tested for heartworm, tickborne illness, and FIV/FeLV testing for cats.